The T-mat is born: lightness, mechanical and thermal resistance superior to a standard ABS

A project born as an internal company experiment whose result has given life to a new material.
The idea stems from the Team’s need to have a resistant, ultralight, removable and easily assembled stool, to be used at work and beyond.
In the workshop the hours to be spent in feet are many and the movements are frequent, you need a light seat that moves between the counters, without cluttering the rooms or hindering the movements. The 3-legged stool seems like the best solution.

At first glance it does not seem like a revolutionary idea, but when the project takes shape and the needs become more and more stringent and demanding, the project totally assumes the character of the challenge. Other variables also enter the project such as the desire to create a unique, functional object that can be modified in a short time and reusable. The goal to be achieved becomes more and more interesting.

Do you know how many hours this project took?
3 hours of model selection and software and printer preparation alone. 36 1/2 hours of continuous printing. 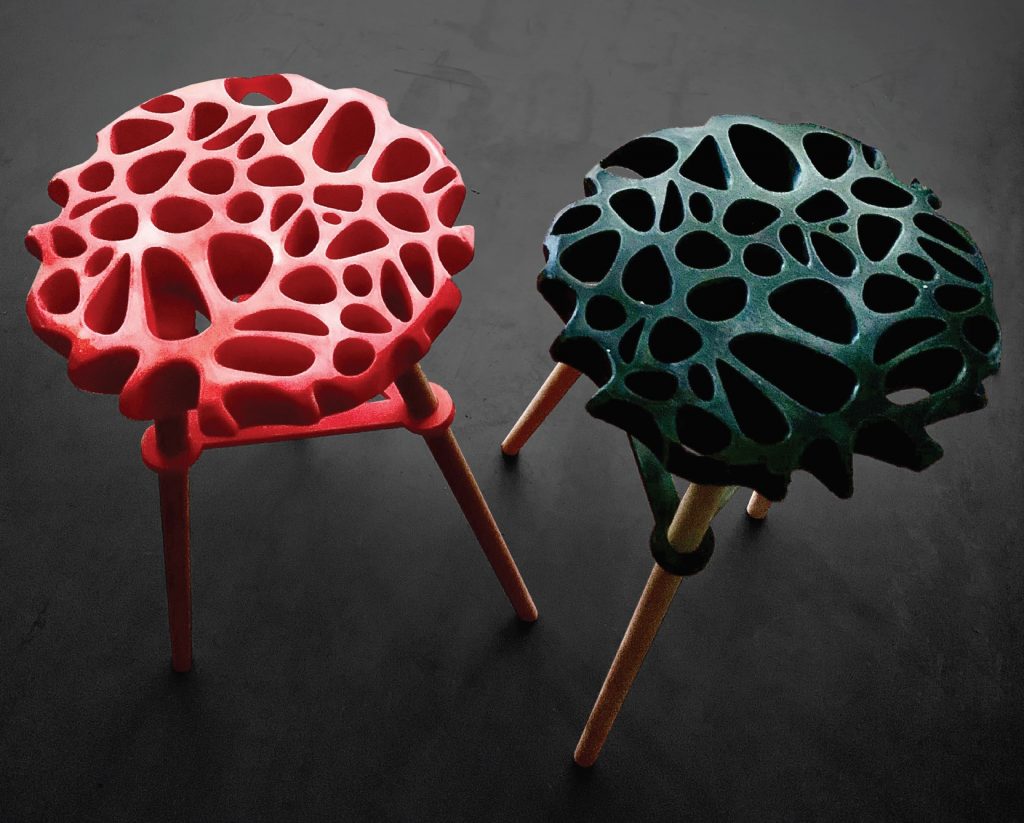 The idea comes from the need to have a resistant, ultralight, removable and easily assembled 3-legged stool to be used at work and beyond.

The project takes shape using the Dirichlet tessellation. This tessellation is a particular type of decomposition of a metric space determined by the distances with respect to a given discrete set of elements of the space (for example, a finite set of points). 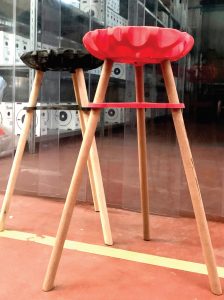 The Dirichlet tessellation technique expands the concept of Design and even merges into the concept of art itself. The stool becomes a perfect example of generative design.

In the project it is seen well done on the seat of the stool that looks like a simply perforated top that hides an ingenious and unique design.
In addition to taking care of the aesthetic part, the Dirichlet tessellation technique expands the concept of Design and even merges into the concept of art itself.

Here the stool becomes a perfect example of how Generative Design (first the algorithm that generates the structure is designed, then the structure) can be used to make objects of common use.

The project becomes a clear example of creative expression, linked to the structured and mathematical world of Dirichlet tessellation.
Dirichlet tessellation are used in practical and theoretical applications in science, technology and visual arts. The Thingiverse platform provided the 3D file for printing.

The project to compose the stool is structured in two parts: the seat and the legs. The session, as we have described, follows Dirichlet tessellation’s rules and was printed individually. While the legs are held together by a rigid triangle that prevents their rotation and increases the strength and resistance of the stool.

Later the two pieces were assembled.

The choice of the material to use is the main issue of this work. It must satisfy several characteristics, primarily resistance and lightness.

Experience immediately saw ABS as the best ally. There is a huge list of advantages in using ABS (for example over PLA) the high durability and strength; it is more flexible and robust.

The choice is quite easy by reading the characteristics of the products. But that’s not enough.
A new material is born, it is T-mat. Also from the ABS family but modified. Designed to have a superior mechanical and thermal seal when compared to a standard ABS. It is a material
already present in industrial use in the automotive and white sector (household appliance – appliance).

With the T-mat, for example, covers for industrial equipment and bodies for digital thermostatic valves are printed. The effectiveness and resistance over time of the T-mat, indoors, are certainly superior to a standard ABS.

The T-mat is stronger and more tenacious, easy in post printing finishing. It is certain that T-mat is a material with high technical performance and was selected among all those available because it was the most suitable and the only one that met the technical
requirements of the stool. Can you imagine the strength and lightness performance of the product we are creating? No, let’s not talk about one stool born only to support weight.

The experiment has set itself a high number of characteristics that in the 3D world are by no means trivial.

The fascination that the future carries within it always captivates everyone, because no one is able to predict it but we all know how to imagine it and get an idea of how it will be.

This experiment, born from a real work necessity, unknowingly allowed us to test ourselves and discover a series of victories that we potentially thought belong to the future. First of all, the possibility of making limited editions if not individual pieces.

A stool actually used in the workshop with important characteristics for strength and lightness. It allows the understanding of the Dirichlet tessellation scientific geometric structure applied to an object of common use and its mechanical seal in addition to modern design.

We are in the future. Only a few years ago it was unthinkable to combine all the features we have described in a single project.

We have created an object that gives shape and substance to projects that were thoughts only a few years ago. Not only have we created a useful piece in the large daily newspaper but we have laid the foundations to clear that ideas considered crazy today are the future of tomorrow. In the description we said that the project lasted approx 36 hours of printing. It may seem like a huge time and the time variable has a very important weight in terms of work.

But if we think that it can take months to obtain an object with traditional techniques, then we are definitely in the future.

Enter your reserved area and apply for reseller program!

Interested in new 3D Printing Materials?
Subscribe to our valuable newsletter and be the first to know!